Talking to some friends on line about political polarization, I came across this chart:

Which it is interesting to compare to this chart:

It's not hard to see how these tie together. Increases in immigration undermine the bargaining position of workers, who resent immigrants and get caught up in the question of who is a real American, and while they resent the inequity, don't blame the rich for it but blame the people they compete with for jobs. You'd see an increase in immigration leading to an increase in inequity and an increase in ethnic tensions, all of which would increase polarization and all of which would have the same root cause. Of course, there could be more than one root cause, but to have the same effect, they would have to play into the same economic/political dynamic. For example, blacks being allowed to compete on a more even playing field, and women entering the work force tend to have the same effect on the bargaining power of the white male worker as immigration, and the base of the Republican party is more white and more male than the base of the Democratic party. Resentment against feminists, immigrants and civil rights legislation would be united by the same economic dynamic.

That's what Marginal Revolution is talking about here: 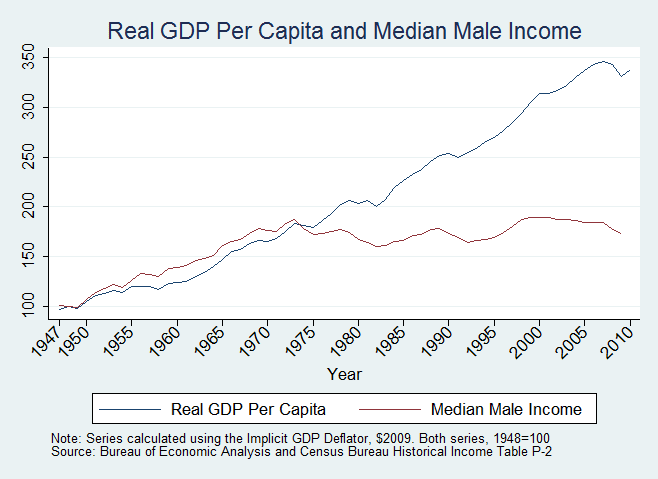 Guys used to use the phrase "free, white, and 21" to describe being in a good situation. Now you are financially better off to be married, because your wife is likely to be working, and being white isn't the advantage it once was. The loss of white male privilege leads to while male resentment. Is anyone surprised?

(By the way, Bruce Bartlett has an interesting take on the tie between the Civil War and polarization here. He says we're just returning to normal. I suppose you could trace the cultural differences he's talking about back to the English Civil War. Party like it's 1642, guys.)
Email Post