The bicameral mind and the strangeness of being human

One particular woman, also named Lauren, proved to be almost a brain double, displaying the same patterns of brain activity when listening to the story as Silbert displayed while telling it. As it happens, the two women had little in common. The second Lauren was just a really good listener, a person who, when listening to a story, slipped into something like a dream state, as if she were experiencing the story herself. She also reported sometimes achieving a similar state while playing soccer. 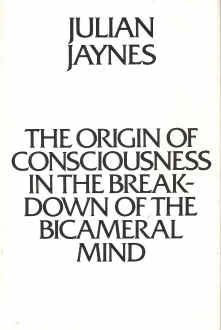 This, in my opinion, ties in with a very interesting book, The Origin of Consciousness in the Breakdown of the Bicameral Mind, by Julian Jaynes. Jaynes defined consciousness as self-consciousness, a sort of metaphorical space in your head that narrates your life. His claim was that this was a fairly recent development, from about 1200 B.C.E.

Prior to that, Jaynes claimed, the mind worked differently, in something like a dream state, with the gods talking to people and telling them what to do, just as recounted in the Iliad. He hypothesized that the right brain equivalent of the left brain's language centers would be the source of the auditory hallucinations that told people what to do. These would be the right brain counterparts to the left brain's Wernicke's area and Broca's area. These parts of the right brain are, in modern humans, pretty much dormant, but it goes against the theory of natural selection that these areas exist without purpose.

Jaynes wrote, "[For bicameral humans], volition came as a voice that was in the nature of a neurological command, in which the command and the action were not separated, in which to hear was to obey."[1] Jaynes argued that the change from bicamerality to consciousness (linguistic meta-cognition) occurred over a period of centuries beginning around 1200 BC. The selection pressure for Jaynesian consciousness as a means for cognitive control is due, in part, to chaotic social disorganizations and the development of new methods of behavioral control such as writing.[citation needed]


The need for self-awareness, therefore, came from a world that was changing rapidly, Jaynes speculated, and by the time the Odyssey was written, the story was about an individual meeting unexpected dangers who had to think about his own life.

When I read Jaynes many years ago, the whole thing seemed far-fetched to me, and completely unprovable. However, some of his neurological predictions that he made have proven true.

His theory was that people would be capable of achieving many things in this pre-conscious state. I wonder if this resembles athletes who are "in the zone," not second-guessing themselves but flowing and acting without narrating their acts. I recall watching a basketball player, speaking of a teammate who had a particularly good shooting percentage in the game just finished, said "he was unconscious."

What if, in Jaynesian terms, he was? Much of what we do in any given day, we don't think about. When I'm walking, I don't think, push off with right foot, lift right foot and move forward while shifting weight over left foot, push off with left foot...and if I did, I'd have little of my mind left for other thoughts. I've taught hundreds of people sailing, and I always know that as long as they are thinking about which way to push the tiller, they will be crippled by a delay and by mistakes, whereas if I can get them to do operate the tiller without thinking, they will do it much better. Self-consciousness of an act allows us to analyze it and possibly come up with new insights, but it is not the way to best accomplish ordinary acts.

Much, if not most, of what the mind does is submerged, and our unconscious minds probably guide us more than we realize. I'm not convinced we even know how much our reason justifies what our unconscious decides.

And how does this tie in with learning? We learn by experience, but because we have language, we can learn by the experience of others. The second Lauren, with her ability to loose herself in the story the first Lauren told, experienced the story in almost exactly the way the teller of the story remembered it.

Silbert also scanned the brain of someone who was there when the events in her story occurred, and got no mirroring of the brain activity she had when she told it, because he had his own memories of the events in question.

So the most likely to experience the story as it was experienced by the teller is not the eye witness, but the person who wasn't there. This is a sort of mythopoetic learning which seems accessible only to those who have not already learned. It is also learning through stories.

What it is not is the sort of command of the gods that Jaynes described. But if that was part of the human experience, surely there must be humans who still experience this. What if children go through this as part of their development, and become self aware as they get older? I remember almost nothing from before I was four or five years old. Was my mind working differently before then?

My mother recounts something that used to happen to her as a girl. She would hear her mother's voice, and go in to see her mother, who said, "I was just thinking of you."

This could, of course, be telepathy, but we have no proof that telepathy happens. We do have proof that auditory hallucinations happen. Could it be that at an unconscious level, she knew it was time to come home, so she heard the command of her mother's voice and came home? If so, she would have been experiencing bicameralism.

The voice of her mother, and the sound of her own name, interacted in a way that involves sense and symbol. The bicameral mind of Jaynes' hypothesis would be experiencing symbolic thought without the awareness of thinking.

If so, it is another aspect of the strangeness of being human that we discussed here and here. And perhaps much of what the mind does is not evident to us, because when we think of thinking, we think of self-conscious narrative.