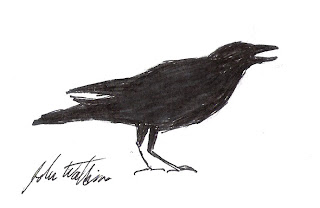 There are fewer crows about now that spring is really here. The great mob of crows hanging about Broadway have dispersed, probably because food is easier to find in the spring. The crows near my apartment have made themselves easier to find, as they are slightly less likely to mob me, and I have traced them back to their actual territories.

One group of three or four lives in the block one block north, and these are the ones that fly up to my apartment and greet me now and then. I always regard them as the most anxious and loud of all the crows I talk to; they are very vocal, but do not fly down to greet me every time, unless I tilt my head back and stare at them while they are croaking at me.

They do not fly any further than the south end of the block, where another group of three or four inhabit an abandoned lot and the block around it. These two groups are not too friendly with each other; but do not attack each other as the crows who live closer to QFC, when they venture down to where I am, when I am putting a couple of treats out. Then, the crows from the abandoned lot will tussle with them and drive them out. The flying that they do resembles WWI flying aces showing off, only much, much faster. They turn and twist in the sky chasing each other into the distance. Often, they seem to be playing. I noticed a "V" shaped squadron chasing a crow who had nabbed a half a sandwich across the sky, then back again, at terrrific speeds.

It seemed to be as much about the game as it was about the food.  To compare them to ancient warplanes is sort of awful, as there is never any bullets involved, just a tussle over territory and food. Much more innocent and playful.

The crows who were mobbing on Broadway have mostly disappeared.  There used to be 50 or so of them, now  I see only 10 at most at a time.  I surmise that they are getting food somewhere else, and not from the garbage that litters Broadway.  The insects, worms and flowers, etc, that they eat have appeared (as well as more food litter, as more people venture outside).

There is still a fairly big crowd on the back street on the way to my shop, but only half as many as there used to be when it was really cold. I noticed they tolerate a greyling gull hanging out with them now and then. He or She hangs about, like a giant gray ghost, on the outskirts of the crow crowd, hoping for a flung treat.

Also, the pigeons are everywhere.

Pigeons are like sparrows; they are not native to the United States, but were brought here as food and for message bearing a couple of hundred years ago. They used to be the backbone of long distance message bearing; but they have since fallen on hard times.

Some were raised as pets and went wild. The more intrepid restaurants  in New York used to go out with nets at dawn, and scoop them up by the dozens, kill and pluck them, and serve them as squab at $50 a plate.  This practice has allegedly been curtailed by the health department, but I am not totally sure about that.

The pigeon population could be controlled in our cities if we built dove-cotes for them. Then, they would not nest in the undersides of awnings and such and crap on people and the sidewalks, but would nest where we wanted them to nest. Then, the theory is, the dovecotes could be raided, the eggs removed and replaced with wooden dowels the same shape as eggs.

And so, the population would go down.

This practice over a few years could cut the population of pigeons back considerably. That no one has done this is just laziness on the part of the local city planners. This is the standard way that pigeon population is controlled in some European cities.

Killing them, even in great numbers,  does not work. The surviving pigeons just have bigger nests and more chicks until the population is replaced.  They respond to stress like this way. Only making homes for them and removing the eggs, will work.

Once in a while, pigeons stalk me, as they see me feeding the crows. This is embarrassing. I've got their number; and they will get no treats from me.  The crows tolerate them; I think they see them as protective coloration; as in as long as there are pigeons, they will not be the most hated bird on the sidewalk. They often hang out with the pigeons on the sidewalk, going for similar food, and hope to blend in.  Instead, they look like wild elk foraging among domestic cows, with one eye on the woods beyond.
Email Post
Labels: by Jamie Lutton crows