I've been busy over the past weekend with the Seattle Wooden Boat Festival, where I was, as usual, one of the judges of the Quick and Daring boat building contest, and spent one pleasant morning taking people for rides on my friend Harvey Nobe's Friendship sloop, Amie. I thought you might enjoy a few photos I took during the festival. 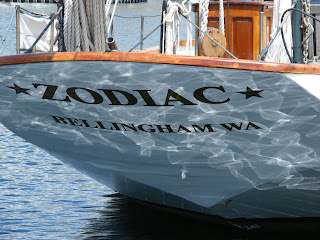 The schooner Zodiac, the largest vessel there at, if memory serves, 127 feet.
Pond yachts were incredibly popular. I'm sure the parents of the girl in this photo were glad to have an event where she could race around, meeting her vessel and relaunching every time it went across the pond, without ruining her white shorts, top and sandals. 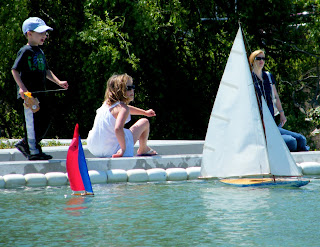 The eventual winner of the Quick and Daring contest was bathtub-themed, and the quickest boat built by quite a few hours at 3 hours 17 minutes. Excellent showmanship helped put Corrie Fisher and Brandon DeLeo's vessel over the top, and helped them win People's Choice Award for this year's Quick & Daring. 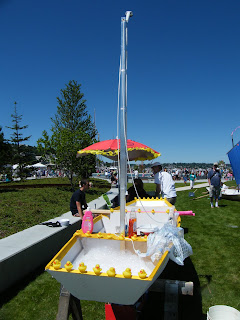 Their main competition came from Peter Chopelas and Carlin Robinson's trimaran Stiletto, which that took nearly 12 hours to build, but performed better on the water and excelled in another category, weight of tools. 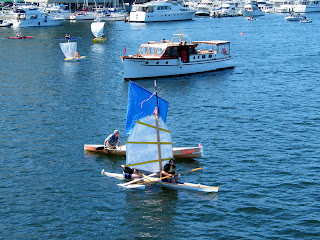 The Adirondack guideboat built by Bill Haas and Chip Thorp, show here with the blue tarp sail, took the longest to build and had heavy tools, including a table saw, but performed well on the water. The winner, Duck Duck, with her shower curtain sail, is finishing third in this picture, followed by Mini Amani, Bob and Bear Zweibel's miniature version of Thane Boatbuilding's catamaran ferry for Lake Victoria, which finished third when the points in all the categories were totaled. Thane Boatbuilding sponsored this year's competition.
The Quick and Daring contest is noted for it's spectacular failures, actually more so than its brilliant successes. Just as happy families are all alike and unhappy ones are each their own tragedy, the instant shipwrecks tend to stick in peoples' minds. This year that spectacle was provided by the team of Adam Karpenske and Kelly Norton, who built a "cold molded" boat by building a framework, lining it with wet newspapers and then filling the boat with dry ice. They had to wear survival suits on the bottom half of their bodies just to safely get into the boat, which they named Black and White and Red all Over, and they had made the boat unusually narrow, with predictable results. 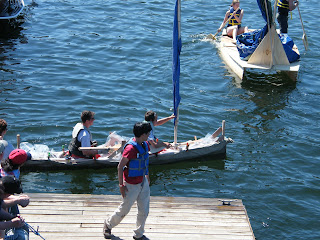 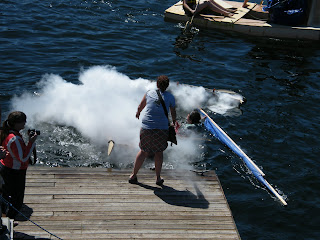 Moments after launch. The dry ice continued to generate fog during most of the race.
Wet Futtocks, Jamie Dickens and Josh Lau, was a skin-on-frame trimaran covered with canvas dipped in molten Crisco, which worked surprisingly well for waterproofing, and featured an unusual propulsion system where the crew sat sideways and operated swim fins with their legs. It worked surprisingly well, allowing them to keep pace with Mini Amani, which is ahead of them here, until one side's propulsion system broke and they started to go in circles. They managed to finish the course under sail.

Double Entendre, a catamaran with double-ended hulls (quadruple-eneded?) wasn't doing too badly until their huge spinnaker filled just before they passed the finish line, taking the team of Dusty and Corrine Wisniew down a waterway from which they could not escape.
My personal favorite at this show, among boats I hadn't seen in a while, was Carl Kamenzind's cutter, Minuet, designed and built in 1929 by Dr. Archie Steel. Carl restored the boat in the early 1990s, but she's been on the hard for a few years and he just got her back in the water. He's done a lovely job, and he was placed near another one of my favorites, the aptly-named Bimi, perhaps the widest boat at the show under 100 feet in length. 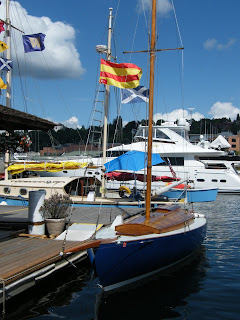 Lovely job on the varnish and the paint, Carl. 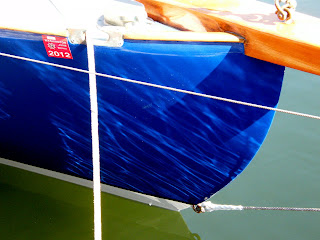