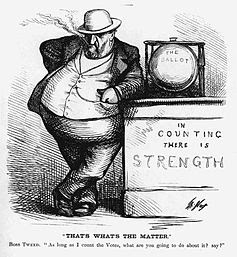 Liberals seem not to like conspiracy theories the way conservatives do. This may be why notions that elections can be -- and may have been -- stolen by people manipulating electronic voting machine totals are not popular. I ran across this on a blog post:


In 1871 William Marcy ("Boss") Tweed said: "As long as I get to count the votes, what are you going to do about it?" Paperless DRE machines ensure that only the company that built them gets to count the votes, and that no one else can ever recount them.

And, of course, someone makes and sells the machines. They must be people of impeccable reputation, because the Help America Vote Act passed under the second Bush administration subsidized local voting authorities buying their machines.

Or not. From an article in Harper's Magazine:


In 2001, for example, a grand jury indicted Philip Foster, Sequoia’s southern regional sales manager, for malfeasance and conspiring to launder money. During the previous decade, he had facilitated a kickback scheme that funneled payments to a Louisiana elections official, who purchased Sequoia equipment while winking at millions of dollars in overcharges. The scheme, which also involved Foster’s brother-in-law and fellow Sequoia employee David Philpot, was hardly an advertisement for the company. Yet Foster, who gained immunity for his testimony against the elections official, not only avoided jail time but was promoted to vice president of sales administration and strategies at Sequoia.

One high achiever actually got his start in prison. Jeffrey Dean’s vote-by-mail software—developed while Dean was serving a sentence for twenty-three counts of embezzlement—came to dominate the U.S. absentee-voting market. Once out of prison, Dean launched his own ballot-printing company with narcotics trafficker John Elder. They later sold it to Global Election Systems, where, readers will recall, Bob Urosevich served as president and COO, before the company was sold to Diebold.

But while criminals might, by definition, be more easily corrupted than most people, this does not mean they favor one side over the other.

But not all the people involved are simply greedy. From the same Harper's piece:

Election Day is now dominated by a handful of secretive corporations with interlocking ownership, strong partisan ties to the far right, and executives who revolve among them like beans in a shell game.

Bob and Todd Urosevich are hardly household names. Yet the two brothers have succeeded in monopolizing American election technology for decades through a pair of supposedly competing corporations: the Ohio-based Diebold and the Nebraska-based ES&S. The latter was founded by the Urosevich brothers in 1979 and is headquartered in Omaha, where it has an Ayn Rand–flavored corporate address on John Galt Boulevard. It is also, let us recall, the same company that may have won Chuck Hagel his Senate seat.

Diebold became the most infamous name in the industry in 2003, when its CEO, Walden O’Dell, a top fund-raiser for George W. Bush, made a jaw-dropping public promise to “deliver” Ohio’s electoral votes to Bush. The following year, California banned Diebold’s touchscreen system, and Secretary of State Kevin Shelley blasted the company as “fraudulent,” “despicable,” and “deceitful.” O’Dell stepped down in 2005, right before the filing of a class-action suit that accused Diebold of fraud, insider trading, and slipshod quality control.


Concerned about its tarnished brand, the company removed its label from the front of voting machines. Then Diebold went one step further and changed the name of its voting-machine division to Premier Election Solutions.

This is all very suspicious, but it doesn't prove anything, does it? Even coincidences like this don't:


Late on Election Day, John Kerry showed an insurmountable lead in exit polling, and many considered his victory all but certified. Yet the final vote tallies in thirty states deviated widely from exit polls, with discrepancies favoring George W. Bush in all but nine. The greatest disparities were concentrated in battleground states—particularly Ohio. In one Ohio precinct, exit polls indicated that Kerry should have received 67 percent of the vote, but the certified tally gave him only 38 percent. The odds of such an unexpected outcome occurring only as a result of sampling error are 1 in 867,205,553. To quote Lou Harris, who has long been regarded as the father of modern political polling: “Ohio was as dirty an election as America has ever seen.”

Still no smoking gun, and the witness who was supposed to blow that whole thing wide open died in a private plane accident that his family regarded as suspicious (information about that is on the same page as the quote above,) so we'll probably never know what happened.

But it's a great scenario for a work of fiction, perhaps even a film from the notorious left wingers in Hollywood.

This is a work of fiction. Any resemblance to actual persons or elections is purely coincidental.

Kyle Roe knew where the bodies were buried. It was his job, after all, to order the hits and consign the incidents to sleep with the fishes, or the worms, as may be.

He knew that the craggy-faced John Fairy, Democratic challenger to his old boss, President Geordie Thicket (a weak man but a useful tool and a genial face for his masters) would have won the last election but one had Roe not taken the precaution of arranging for a large number of votes to be flipped from Fairy to Thicket somewhere in the counting of ones and zeroes late on a cold Ohio night.

(Go to a flashback. Oh, hell, I feel lazy, this part can just be written with a search/replace program from coverages of the 2004 election.)

Late on Election Day, John Kerry John Fairy showed an insurmountable lead in exit polling, and many considered his victory all but certified. Yet the final vote tallies in thirty states deviated widely from exit polls, with discrepancies favoring George W. Bush Geordie Thicket in all but nine. The greatest disparities were concentrated in battleground states—particularly Ohio. In one Ohio precinct, exit polls indicated that Kerry Fairy should have received 67 percent of the vote, but the certified tally gave him only 38 percent. The odds of such an unexpected outcome occurring only as a result of sampling error are 1 in 867,205,553.

(With luck, I've changed that paragraph so much that Victoria Collier will never figure out that it's plagiarized.)

Roe is tense on the night of the 2012 election, but he knows the fix is in. For four years, the nation has been ruled by a man Roe considers alien, a Vulcan, Zaphrod O'Bannon. Roe's candidate to replace him, Mech Omnibot, has been functioning badly, showing poor awareness of his audiences, saying things publicly that he is only supposed to say to his owners about how contemptuous they are of voters.

Mech is projecting confidence, knowing that his fellow machines will swing the election to him. He's been programed to prepare the public for his victory by claiming that his polls show that the turnout among robots will be higher than expected, and he will win fair and square.

Roe is on television with his captive propaganda network, Faux News, when someone goes off the script.

The whole election is supposed to hinge on the outcome in a few counties in Ohio, making it dead easy to fix, but well before the numbers are "healed" to stop the bleeding in Omnibot's vote totals, Kegan Melly announces that Faux News is calling Ohio for O'Bannon.

Roe hits the roof. He starts protesting that only 75% of the vote is counted, claiming implausibly that there are enough Robot districts to bring it home for Mech Omnibot. The actual problem is that if even the Faux network calls it for O'Bannon, fixing the vote will cause suspicion.

The Omnibot campaign is frantically calling the Faux newsroom telling them not to call Ohio yet, but not everyone is in on the plan. Melly walks though the Faux News building to talk to the wonks at the decision desk, and the harried statisticians assure her that they know what they're doing.

Worse news is coming from the western and southern quadrants. States are flipping that shouldn't be, and the election is slipping out of control as voters in areas not controlled by Robot Party companies plump for the Vulcan party, making what Roe can accomplish with his carefully structured system moot.

Roe knows that his backers will be out for blood, and needs to make sure it isn't his. He cancels the maintenance contract for Mech Omnibot, and lets the corrupted programs that were causing problems late in the election do the rest. Soon, they are all out for Mech Omnibot's blood, and Roe's role in future elections is secure.