1945, and she wore nothing but a flimsy burnoose

Since my father's death, we've been going through his effects and we found two postcards that I hadn't known about. They are postcard my father sent my mother when he went through French North Africa in about 1945 on his way either to or from Italy, where he was a bombardier in B-17s. 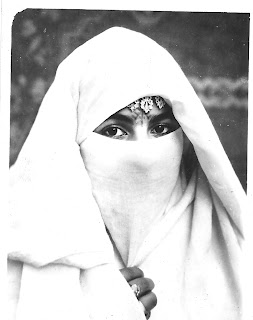 About this lovely young woman, Dad wrote the following on the back of the postcard featuring her: 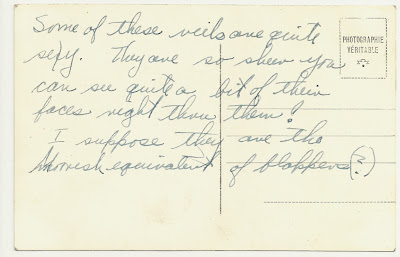 So the women with the sheer veils were the equivalent of flappers, in his view, fashionable young flibbertigibbets who were, as Firesign Theater would have put it, wearing nothing but a flimsy burnoose. Of course, the veils on European hats were even more revealing, but to get wrapped up in that comparison misses the joke.

There's a line in Jurassic Park where the mathematician says, "life will find a way." He's talking about reproduction, so in a sense he's saying sex will find a way. No matter what the mores of their society, men and women will find a way to make themselves attractive to the opposite sex.

The veiled woman contrasts with what my father called the "tough-looking girls" in the postcard below, with a repressed eroticism that is more attractive. Clearly, the prostitutes are posed to make it clear that what they offer is easy access, rather than the most desirable partner. 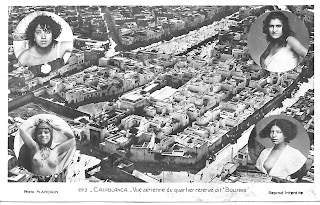 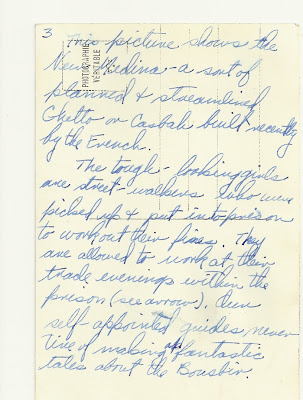 It would appear the French authorities started their own bordello and arrested and fined these women so that they would staff it, since they were (if Dad got the story right, and I should note that the last sentence shows he was skeptical) paying off their fines for the crime of prostitution by engaging in prostitution while in jail. Nasty bit of business, and it sheds some light on why the Algerian war was so bitter -- a colonial power that treated the people of its colonies this way would certainly engender an extraordinary sort of resentment. Of course, if we are to believe even half of what Henri Charrière, author of the memoir Papillion, had to say about French colonial penal colonies, they didn't treat men who were French citizens any better. Colonialism does seem to require a certain dehumanizing of the colonized.