The infinite improbability of economics

I like reading stuff that blows my mind, just to stretch it. Like A Brief History of Time,  Stephen Hawking's book about physics that is just accessible enough to tempt people like me to try to understand it. In the current Scientific American, I read that gravity, time and space might all be emergent properties resulting from quantum mechanics. So now, when I trip or drop something, it's because of quantum, and what can you do about that? Birds may even be using quantum effects to navigate.

Another sort of mind stretcher is economics. We have brilliant economists, even Nobel prize winners, recommending opposite solutions to economic problems. They can't all be right, and they can't all be dumb, so the solutions can't be coming from pure logic.

Although they use a lot of math, theirs is a science of values, founded by a moral philosopher (Adam Smith) who was thinking deeply about how a system of values works. And speaking of math, the numbers they use sometimes look like the input for an infinite improbability drive. During the stimulus debate, the difference in estimates of the output gap were roughly equivalent to the gross domestic product of Belgium.

Now, currently the debate centers on whether the proper response to a recession is the sort of austerity practiced by the Germans, or the Keynesian approach used in America.

One liberal economist, here, says we should notice what has happened to economies following these different approaches, and conclude that the Germans were wrong because they haven't performed that well. He illustrates the point with this chart: 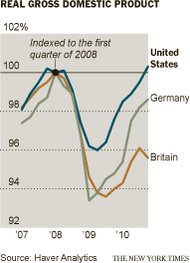 Another says we should attribute the superior (?) performance of the German economy to the fact that they have not really been austere, when you compare total government spending from all levels of government:

You can read his full (rather snarky) post here.

If these numbers are correct, and I admonish the jury to remember these bloggers are not under oath and are, let's face it, economists, why are conservative economists always telling us that we should cut spending like the Germans have done so that we can enjoy the greater success they have had? Shouldn't they be proving their point by citing the poor performance of the Germans in spite of their spendthrift ways?

Ah, but the Germans were not running big deficits, since their conservatives still believe in paying for their government. Could their worse (or better, depending on who you believe) economic performance be because they have been too fiscally responsible? But wait, didn't the German banks lend a lot of money to the Irish and Spanish banks, which nearly collapsed and were saved by the Irish and Spanish taxpayers? Whose good deed is being punished here, and whose sins rewarded?

And if the debate over Keynesian or monetarist solutions were not enough to stretch your brain all out of shape, we now have a man, Ron Paul, overseeing the actions of the Federal Reserve Bank who does not believe the Fed should exist. In fact, he's not down with Federal Reserve notes, the currency of the realm. He opposes

currency, and the fact that money these days is sometimes nothing but blimps on a computer screen.

A return to the gold standard would eliminate all discretionary monetary policy, which means we now have an important part of government that considers even Milton Friedman too far to the left.

You can make the math as difficult as that Stephen Hawking left out of his book, but it's all still about values, and that's an area where our emotions take hold.
Email Post