To read is to become a stolen child 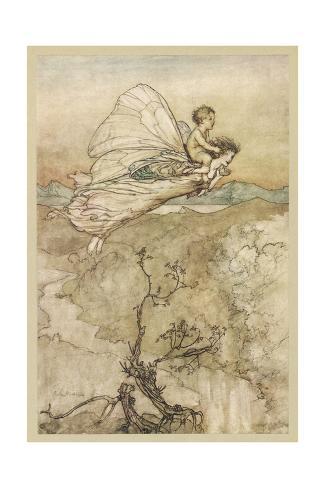 Come away, O human child!
To the waters and the wild
With a faery, hand in hand,
For the world's more full of weeping
than you can understand.

That's the refrain from The Stolen Child, by William Butler Yeats. It came to mind after my father's funeral last month, when we gathered at my sister's house and her granddaughter was running around with fairy wings on.

But then, last night, I stayed up reading into the wee hours, barely able to keep my eyes open as I came to the end of a book (Gridlinked, by Neil Asher, sort of sci-fi noir with alien dragons and a 007-type of secret agent. This is a bit like the reviewer who said of a Robert Ludlum book, "this is a terrible book, so I stayed up until 3 a.m. reading it.")

It's happened enough to me that it doesn't feel strange, but it is strange for a medium-sized mammal with a real world to live in to be taken away like a stolen child, enticed into a world that isn't real in the conventional sense, but is real enough to take us into it, and away from the world we know.

Stories are a kind of virtual reality we have been entering since the invention of language. Symbolic thought is a world my cats don't experience, cannot experience because their sentience is of a different and more practical nature. We will always have a literature, at least as long as we are human, which will give us sanctuary from the world in which we eat and sleep, teach us things we have not experienced in the real world, and let us empathize with the troubles of those we've never met.

I'm reminded of a quip I've quoted before, from Kung Fu Monkey:

There are two novels that can change a bookish fourteen-year old's life: The Lord of the Rings and Atlas Shrugged. One is a childish fantasy that often engenders a lifelong obsession with its unbelievable heroes, leading to an emotionally stunted, socially crippled adulthood, unable to deal with the real world. The other, of course, involves orcs.


We come back from these worlds marked by them. An Episcopal minister, the Reverend Carla Pryne, (no relation of Hester Prynne, you can tell by the spelling and the fact that she's real) recently told me that reading -- she mentioned in particular C.S. Lewis's Narnia books -- led her to her profession. On the other end of the scale, Rep. Paul Ryan, R-Wisc., was influenced not by Christian apologists like Lewis, but by Ayn Rand, who shared with Karl Marx a conviction that religion does terrible things to people's minds and their lives, and a determination to substitute her philosophy for religion in peoples' minds.

Whether your world view is shaped more by The Lion, the Witch, and the Wardrobe or by Atlas Shrugged, the way we live our lives is in part a product of the stories we inhabit. They become a part of us, and we become a part of them, bringing a desire to live those stories in our real world back with us from our expeditions into fantasy. Because our consciousness is shaped in part by the enchanted world of books, the more bookish we are (for that matter the more we love stories from any kind or source) the more symbolic our lives become. In fact, David Copperfield, Charles Dickens' masterpiece, begins with this sentence:

Whether I shall turn out to be the hero of my own life, or whether that station will be held by anybody else, these pages must show.

It's seldom that explicit, this desire to live our lives as stories, though in Lou Reed's perceptive lyric from Street Hassle,

But you know people get all emotional
and sometimes, man,  they don't act rational, you know
they think they're just on TV.

Personally, I've always hoped my life would turn into a musical comedy, but I see people making decisions that make their lives more dramatic instead of solving their problems, and I know the story they are living is more like a soap opera. That's the kind of story where they learned what life's supposed to be like.

We remain animals living our lives, eating, defecating, sleeping, reproducing our genetic material...but what makes us human is this peculiar fact, that we are stolen children, taken by the fairies of our myths, legends and history (which is both myth and legend,) and bringing those stories into the real world where we try to live them.

For he comes, the human child,
To the waters and the wild
With a faery, hand in hand,
For the world's more full of weeping than he can understand.