Bunny and the pygmy dinosaur 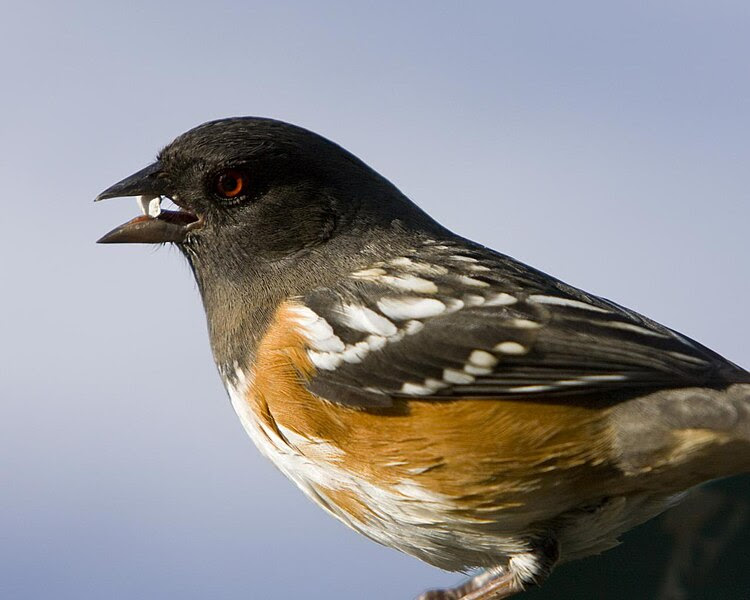 My cats are having trouble adjusting to a door left open to Vashon Island's green, wild world of trees and grass and birds and insects after a lifetime spent indoors in a city apartment. Bonney, out of an abundance of caution, hides, and has so far done no more than look outside. Bunny, my rumpy Manx, has courage in abundance, but that abundance so far does not lead far from the door.

Often, she stands on the concrete porch while a small bird, possibly a towhee, hurls abuse at her (at least I think that's what it is, I don't speak chirp.) I would imagine the bird has a nest nearby, and decided views on whether cats should be let outdoors.

Bunny is a mighty insectivore, but while she's death to bugs, she's never even tried for a bird. The towhee, if that's what it is, can't know that, though.

It sits on its limb and declaims at the top of its lungs, no doubt saying something like, "I am the descendant of dinosaurs, you puny mammal, take one step onto the grass and I will crush you!"

High above, a crow, which probably could take out a house cat without too much trouble, caws its disapproval as well. Bunny watches the towhee cautiously, never showing the longing for predation that she and Bonney displayed while watching pigeons through a protective layer of the apartment's glass. This is not a game, they seem to realize, there's a real bird out there, and it's no dumb pigeon, it really does seem to have an agenda regarding cats.

I'm sure the towhee is wise enough to know that jawboning (or whatever the beak equivalent is) has its limits, and knows to keep its distance from cats. But at the rate things are going, I'm wondering if it will ever need to apply that knowledge. It's a shame I don't have Chuck and Frank, my shop cats from the University District, here, because being younger, they likely would have adapted to outdoor life more quickly.

But then, there's something to be said for a brace of cats who are safe for songbirds, isn't there?