2011 homebuilt boats at the Center for Wooden Boats

I spent Saturday and a wee bit of Sunday last week at the Center for Wooden Boats Homebuilt Boats Weekend. I forgot my camera, but managed to get a few shots with my phone.

I didn't take a lot of notes,but here are some of my favorites: 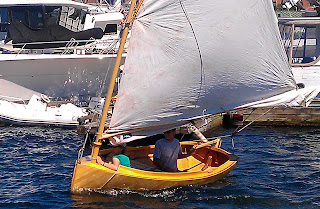 Bruce Smith bought this boat only partially planked, and finished it in seven weeks. It sails remarkably well, and who doesn't like to look at a catboat in a hurry? At about 11 feet, she's a small one, and about 300 lb. lighter than a Beetle Cat. With that sharp, high bow (below) she's a lot drier as well. 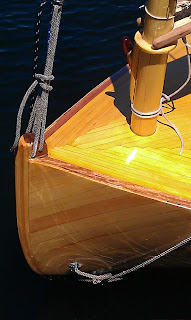 I mean, try doing this in a Beetle Cat, even if you removed enough deck, you'd be soaked: 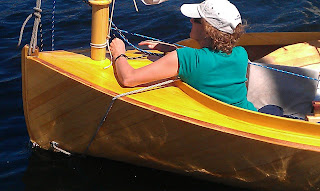 For the broader scene, here's a view of the setting, with Tim Yeadon's Big Food on the left, Noah Seixas's melon seed against the dock by the boathouse. 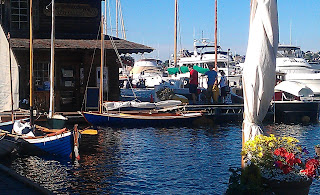 Chris Cunningham brought his a cruising rowboat (a V-bottomed garvey) with a queen-sized bed and a wood stove. Nice work on the varnished foredeck. 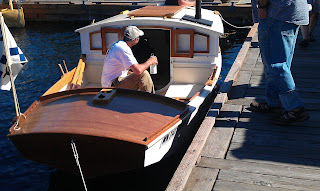 I was happy to see that Ernie and Erica Wisner made it with their sampan, done from plans taken off at the Singapore drydock by William Maxwell Blake about a century ago. 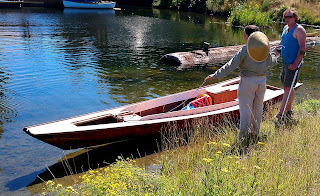 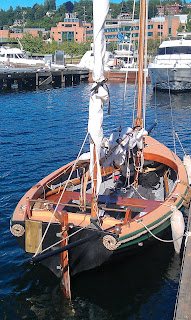 Robbie Bumpus built the above Edwardian yawl from plans in Dixon Kemp's Manual of Yacht and Boat Sailing, and the design dates from about 1880. On the plans, the rig looks frighteningly large, but under sail and with the ballast intended, it seems about right. I must say, I've never been able to develop any affection for the push-me-pull-you tillers so many small yawls have, and the off-center mizzen looks like a decent solution, though I suspect the mizzen isn't as useful on port tack as on starboard. Todd Waffner built a Caledonia Yawl with another solution, a nicely laminated curvy tiller. I've seen iron ones like this made by a blacksmith. 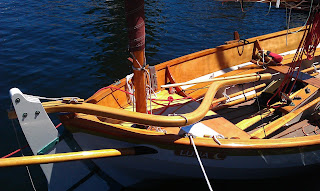