Let's take another look at The American Way

David Brooks has a column this week in which he claims that "The world economy is a complex, unknowable organism," and that all who think they've found the "magic lever" that will make the economy perform better are wrong.

Paul Krugman replied in a post on his blog, maintaining that "realizing that there’s a lot you can do to reverse a short-term slump isn’t magical thinking — it’s what basic macroeconomics, what we learned through hard thinking and hard experience, tells us. Rejecting all that may sound judicious, but it’s actually an act of intellectual amnesia."

He does agree with Brooks that there is little the government can do to improve long-term growth.

I suspect that both men are wrong. Brooks certainly is; economists ranging from Milton Friedman to, well, Paul Krugman, agree that when the country is not in a liquidity trap, monetary policy can stimulate the economy. History demonstrates that they are right.

But what about long-term growth? I maintain that a very old idea, originally called "the American Way," points us to the answer. Readers of this blog will recall that I love charts, and the information usually published by the sources that originate them. So here's a chart from Investment U on American spending on infrastructure:

This graph comes from an article by David Fessler about how the infrastructure of this country -- roads, bridges, sewage lines, etc. -- are falling apart.

"The World Economic Forum published a report that places America twenty-third in terms of infrastructure quality. The ranking is heading south. It found that our roads, railroads, airports and port facilities were all judged inferior to those of northern Europe."


And the effect can be seen in the age of our infrastructure: 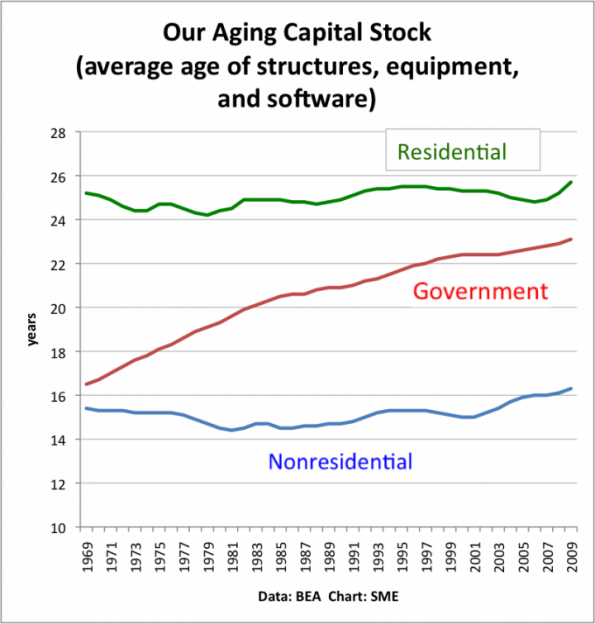 And what are our other competitors doing? 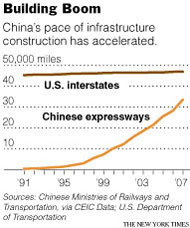 This graph comes from a January 22, 2009 New York Times article that tells us:

"The combined national, provincial and local spending for economic stimulus promises to change the face of China, giving the country a world-class infrastructure for moving goods and people quickly, cheaply and reliably across great distances."

Notice that the first chart starts in 1956. The steep slope on the left of the chart goes back to 1953, not coincidentally the beginning of Dwight Eisenhower's administration. In 1919 Eisenhower had participated in the Transcontinental Motor Convoy, spending 62 days crossing the country, and in the process having to repair 88 bridges. Most of the roads were unpaved, which may help explain why the trucks kept breaking down and crashing.

It has been said that in war, amateurs study tactics, professionals study logistics. Eisenhower knew logistics very well, and knew that for the economy to function efficiently, it needed roads that would permit good logistics. He ramped up infrastructure spending, and signed what he regarded as the highest accomplishment of his presidency, the Federal Aid Highway Act of 1956.

Now, China is doing what Eisenhower did.

Ah, you say, but our roads are already built. Well, yes, but. Remember those bridges the Transcontinental Motor Convoy had to fix before they could cross them? Those were already built, too. Stuff wears out. If you own a factory, you don't figure, okay, I've got my factory, I don't need to spend any more. Or if you do, you are soon uncompetitive. You replace machines that get old, you constantly try to improve your capital stock, and you sometimes tear the whole thing down and start over.

This was actually a problem for the co-op plywood mills that were once fairly common in the Northwest. The workers would often vote to distribute profits to themselves, rather than invest in more machinery. The business managers they hired would have to tell them, no, you can't pay yourself that money, if you don't buy a new pealer you won't be able to keep making plywood.

We're having a similar problem with our country. In essence, it's a big co-op, where we vote on whether to buy a new bridge or keep that money in our take home pay. We've been putting off paying for the new bridge for so long, some of them are literally falling apart.

Part of the problem is ideology. In 2009, Michael Steele, then Republican National Committee Chairman, said, "You and I know that in the history of mankind and womankind, government — federal, state, local, or otherwise — has never created one job." Republican presidential candidate and former New Mexico governor Gary Johnson, earlier this year said, The fact is, I can unequivocally say that I did not create a single job while I was governor." His point was that private industry creates jobs, and his claim is that despite the fact that the state of New Mexico employs a fair number of people, it gets in the way of private industry employing those people.

The problem with this philosophy is that sometimes, government produces goods more efficiently than private industry. Consider lighthouses. First, there were concerned people who realized that on a dark and stormy night, ships tended to run onto the rocks. Some of them built bonfires to warn them that they were nearing the rocks.

Then, the invisible hand of the market intervened, as people found a way to make the signal bonfires pay. They built them in spots that would cause mariners to run onto the rocks, then looted the wreckage.

Government regulation strangled the private economic enterprise of the wreckers, and competition from tax-supported lighthouses didn't help, either. Thus, a libertarian paradise was strangled in its crib, and the lives of countless mariners were saved.

What this admittedly sardonic account reveals is that sometimes the market fails. Sometimes it's possible to redesign the market so that the incentives align with peoples' needs (the Affordable Care Act is an attempt to do that), sometimes a market failure just means you have to put the matter into public hands.

But the public no longer feels that it has a really direct connection with its government. Part of the reason for this is that since the 1960s, a large number of people have been trying to convince them that the government is an alien thing that only has the capacity to harm them. The mantra that government is not the solution, it's the problem, has a nice ring to it, and we all know instances where government has not functioned as it should.

But a recent study found that 40 percent of Medicare beneficiaries and more than 40 percent of Social Security recipients say that they have not benefited from any government social program. Government is so ubiquitous that people are often not aware of the benefits they receive from it, even when it's something as visible as roads and bridges. So how can you expect people to appreciate the benefits of productive public assets?

Every grade-level crossing delays traffic and trains. If there's enough traffic for this to be a real problem, as is the case in much of the Northeast, the country can be made more productive by building an overpass, but it's not in the interest of any private party to do that for the rest of us.

This is why President Obama is pushing for a National Infrastructure Bank, to invest in public goods. He seems to think that once the debt ceiling issue is dealt with, he can get this engine of investment in public capital projects through congress. This seems quite unlikely to me.

Let's do a quick thought experiment. If a Republican were in the White House at a time of high unemployment and the country was at war, would a Republican-dominated congress decide that it was so important to cut spending that they could not, in good conscience, raise the debt ceiling?

Actually, we don't have to do that experiment, because it already happened. In 2003, a Republican-controlled congress raised the debt ceiling a record 984 billion, while the country was in a much less severe recession. Bush lowered taxes that year, and in his first term increased spending by 26 percent. Democrats wanted to raise it only 300 billion, which would have allowed them to revisit the matter.

If the plan presented today by Mitch McConnell, Senate Minority Leader, resolves the debt limit controversy, I don't expect to see the infrastructure investment problem to be easily resolved. President Obama may want to believe America is still a country that can do big things, but party politics seem to trump that every time. The real battle is to restore peoples' feeling that they own the country, and can invest in it.

When the country was young, men like John Qunicy Adams, Alexander Hamilton and Henry Clay believed in something called "the American Way" (the Wikipedia entry refers to it as "the American System.) It was essentially mercantilism,  the dominant economic paradigm of the time, and it featured a concerted effort to build first-rate infrastructure.

Perhaps it's time to revive the term. After all, who could oppose "the American Way," especially when it featured the support of the earliest interpreters of what America should be? Not all aspects of the plan Hamilton and his compatriots pushed (I have my doubts about how useful high tariffs are) but there are some very useful ideas there.
Email Post