Probably the blogosphere's most data-driven writer is Nate Silver, who is therefore one of my heroes. Too much of our conversation is driven by opinion and narrative, too little by facts.

However, much as I think his latest post is a must-read, I see a problem with his interpretation of the data (and the fact that I can do this is one of the greats things about data-driven blogging.)

Here are two charts from his post, which, with apologies to Mr. Silver, I have modified (I hope he doesn't mind, normally I'd link to the chart and do my best to drive traffic to him, but I think the added line makes my point more clear.) The top chart shows the ideological alignment of governors belonging to the Republican (red) and Democratic (blue) parties after the 2010 election, and the bottom chart shows the Republican governors before that election.

Mr. Silver says that this shows the Republican governors are leaving the moderate voters behind. And, indeed, prior to the 2010 election (second chart,) Republican governors did show a remarkable spread of ideology. I've added a line showing where the center is on both charts, so that you can more easily see how far from the center each party is. The vertical axis is the ideology of the governor, from zero (most liberal) to 100 (most conservative) while the horizontal axis is the ideology of the voters in their state on the same scale. To show where they would need to be to perfectly align with voters, my added diagonal line goes from zero to 100 on both axis. 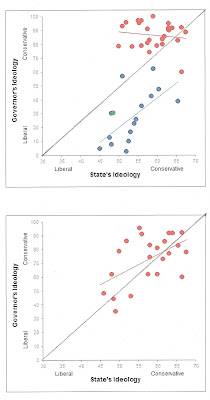 It looks to me like prior to the 2010 election, the Republican governors were remarkably well aligned with their constituents. Following that election, they clustered at the top of the scale in the conservative corner -- but take a look at those Democrats. They show a wider spectrum of ideology, but all but one are more liberal than their constituents. Three Republicans cross the line.

Indeed, what we see here is a continuation of a long political trend to more partisanship, and our politics are at this point as partisan as they have ever been since Reconstruction.

We discussed this trend in this post. Take a look at the trends Voteview's data show. The problem is not as asymmetrical as liberal bloggers would have us believe, though. Those Democratic governors in the top chart are as far from the center as the Republican governors, even if they are more inclined to reflect the degree of conservatism of their constituents. The difference is that while Republicans have clustered in conservative states and on the conservative end of the spectrum, the Democrats are instead a fairly consistent degree more liberal than their constituents.

The difference is not so much that one party is further from the average voter in their states. It is that one is ideologically driven and therefore likely to be elected only in states where that ideology sells, whereas the other has a pragmatic program of adapting to the ideology of the available voters, to compete in a wider variety of states while pulling policy about the same degree from the center.