One of the theories about the role of reason in human society is that it exists not to arrived at the truth, but to persuade others that you already possess it.

Which leads us to today's thought experiment: Would conservatives consider the Affordable Care Act constitutional if it had been passed by a Republican president and congress over the objections of the Democrats?

The question itself makes sense, because the basic form of the Act was proposed by conservatives, notably the Heritage Foundation, and supported by Republican legislators from the time Hillarycare was proposed by the Clinton Administration in 1993 until it was adopted by President Obama during his run for office in 2008. Many supported the mandate from at least the time of Stuart Butler's 1989 Heritage Foundation speech in favor of it.

During those 15-20 years, the idea of reforming American health insurance markets instead of going to a single-payer, "Medicare for everyone," system, had enough currency among conservatives, that the amoral, ambitious Mitt Romney thought he could advance his hopes of capturing the White House on the Republican ticket by getting the state of Massachusetts to adopt this reform while he was governor of that state.

But Republicans made a strategic decision early on that they would oppose anything Obama wished to accomplish in order to deny him any accomplishments. In this, they were following the strategy of the Republican congress that faced Clinton's health insurance reforms down, defeated him and won a signal victory in the 1994 mid term election.

And it worked about as well in that regard. The Affordable Care Act passed, became an issue in the 2010 mid term election, and that election was a signal victory for Republicans, who promised to repeal the Act and replace it with their own proposal.

The problem is that Obama and the Democrats have already passed the market-based reform the Republicans had been pushing for at close to 20 years. Having rejected their own idea and labeled it "socialism," Republicans are fresh out of ideas.

And having spent the last 30 years or more trying to make the Supreme Court an arm of the Republican Party, they seem likely to see the most reliable partisans on the court -- Justices Alito, Thomas and Scalia -- reject the ideas that the party that put them in power used to support.

The swing votes seem to be Chief Justice Roberts and Justice Antony Kennedy. One of the reasons Republicans do not look back fondly on the presidency of George H. W. Bush is that David Souter, his appointee to the Supreme Court, tended to follow precedent instead of current Republican orthodoxy. 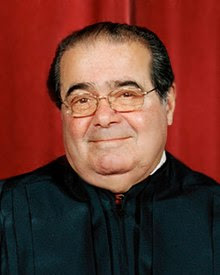 Antonin Scalia, a Reagan appointee, seems to have no such problem. In fact, it seems unlikely that any of the three most reliably "conservative" judges will find in favor of the law.

But I have to wonder how they would be inclined to look at the problem if the politics were different. Just as "conservatives" on the court were happy to get involved in state law in the Bush vs Gore suit over the Florida recount, while Souter and the justices appointed by Democrats came out in favor of the states' rights view of that matter, I find it hard to believe that principle, rather than politics, is guiding jurisprudence on this issue.

That being the case, why do we continue to call these judges "conservative," rather than partisan?