Mckinley and Bryan, Romney and Obama: The gilded age and the tsunami of money

Seth Masket posted a chart a while back that shows that the most expensive election, relative to GDP at the time, was the 1896 election between William McKinley and William Jennings Bryan. How much of an outlier was it? Check out his chart: 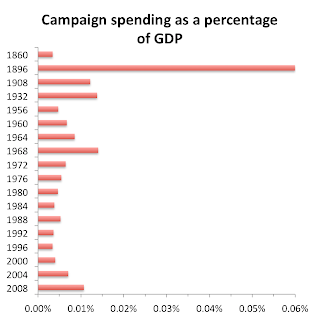 I doubt this year's election will rival 1896 as a percentage of GDP, but I do think the Citizens United decision, coupled with the financial industry perceiving itself as threatened, will produce a campaign setting some modern records for expenditure.

According to Masket, the Republicans outspent the Democrats 5-1 because Bryan, famous for his "Cross of Gold" speech, was on the side of the debtors and opposed to the interests of the financial sector.

McKinley's victory was transformational, a realigning election that secured for the Republican Party a coalition that gave it the bulk of the electoral victories from the end of the Long Depression until the Great Depression. McKinley's coalition consisted of businessmen, some of the better off farmers, and skilled workers. Bryan's coalition of the outsiders was backed primarily by poorer farmers in the South and the mountain West.

Bryan proposed printing money backed by silver, which would enable a large increase in the money supply, creating inflation and improving the situation of debtors at the expense of creditors. But the creditors had all the cash.

Mark Hanna, a wealthy businessman from Ohio, managed McKinley's campaign and raised unprecedented amounts of cash from bankers and corporations, much of which financed various speakers (including Theodore Roosevelt) touring the country on McKinley's behalf.

Bryan lost, but his coalition formed the backbone of Franklin Delano Roosevelt's voters. And Roosevelt broke the power of the elites who had amassed huge fortunes in the late 19th and early 20th century while the money accumulated at the top of the income scale and those below were left behind.

Now, Mitt Romney seems to be showing that he has the backing of the business and finance communities, and the ability to outspend his rivals by large margins, just as McKinley did. Like McKinley, he represents the interests of the wealthy, and is financed by them.

But President Obama is neither William Jennings Bryan nor Franklin Delano Roosevelt. His coalition is in the cities instead of the countryside, and his strength is on the coasts and in the North -- essentially, McKinley's territory. Like FDR, his former classmates that went into finance may view him as a class traitor, but while FDR said "I welcome their hatred," Obama will understand them, and calmly attempt to reason (as one might expect of our first Vulcan president.)

The Citizens United decision makes a rerun of the spending splurge by business interests possible. We may see a tsunami of money directed at preserving our new gilded age, with its inequity and its powerful financiers.

But Obama has shown himself a formidable campaigner, and all the likely Republican nominees have weaknesses. History never repeats itself, but the shouts and murmurs of old conflicts echo down the years.

Will we hear an echo of FDR's 1936 Madison Square speech? Here's part of it:

For nearly four years you have had an Administration which instead of twirling its thumbs has rolled up its sleeves. We will keep our sleeves rolled up.

We had to struggle with the old enemies of peace -- business and financial monopoly, speculation, reckless banking, class antagonism, sectionalism, war profiteering.

Never before in all our history have these forces been so united against one candidate as they stand today. They are unanimous in their hate for me, and I welcome their hatred."