Our Corvid Overlords: A wading crow, and the theft and mimicry of crows 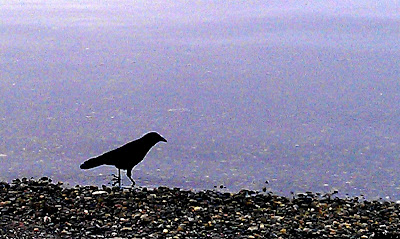 I saw a crow wading in the shallow water in the park by my home (yes, that's the little devil, above.) I suppose he had seen the herons doing this, and getting food, and it just didn't look that hard.

It reminded me of a phenomenon my late father noticed before I did. The crows would watch the seagulls, who hunted shellfish by the shore, then flew high enough that when they dropped them on the pavement at the park's parking lot, the shells would break and they could get at the furtive creature within.

Crows, being crows, quickly figured out that they could steal the clams and eat them before the gulls could fly down to claim their food. Gulls, not being fools, went elsewhere.

Then the fun part started. The crows had learned from the gulls that if they found a clam or mussel, they could break it on the pavement. They also knew, from having done so themselves, than any food accessed in this way would be stolen, so they tried to drop the shellfish from low enough that they could claim it before another crow could steal it.

They were hoist on their own petard. Any place you find one crow, you'll find another, equally clever, and with a similar easy attitude toward the property rights of other birds. If they dropped the shellfish from high enough for the trick to work, another crow would enjoy the food. If they dropped the clam or mussel from high enough for the shell to break, they'd never see a calorie of good from their work. And if they dropped it from low enough to quickly fly down and claim the food, it was too low to break the shells.

The crows are too clever by half, and lacking the ethics of seagulls, lack a way to exploit the clams.Gulls have been at the game for longer, and understand that theft will kill the entire enterprise. Crows, each pursuing its own interest alone, cannot quickly create a culture that can harvest clams, because they have neither learned to make it a community enterprise where the crows take turns breaking clams for others, nor have they learned to let the workers enjoy the fruits of their labors, as do gulls.

It's an avian version of the internal conflict of libertarianism. And just perhaps, it's the reason Our Corvid Overlords have not yet taken over the world.