Gas consumption falls, as the heart of Saturday night pines

Apparently, that's not what kids today are doing. Miles driven and gas consumption keep falling, usually a sign of less economic activity and less commuting, even as the economy continues to recover. 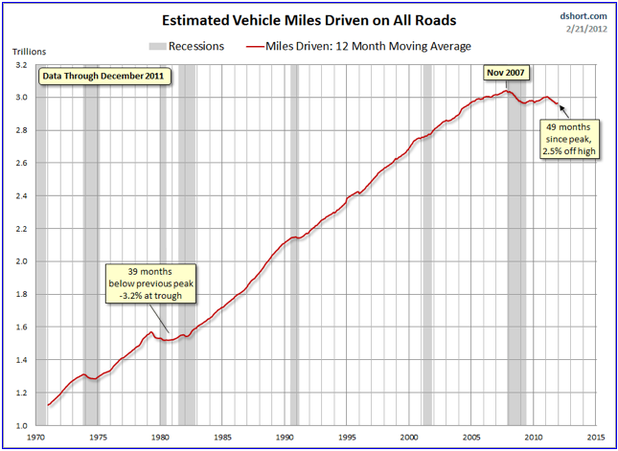 That's from this source.

Now, part of the answer to this puzzle is that kids today are less likely to get a driver's license than kids in my generation (which may be part of the reason the increasingly geriatric GOP wants to have voter ID laws that accept a drivers' license but not student ID.) Whereas many people my age and older grew up cruisin' and meeting each other that way (see American Graffiti,) and a later generation liked to hang out at the mall, the current generation communicates through Facebook, texting and cell phones. When they want to get together in real life, they don't have to cruise around looking for each other, they can just agree on a meeting place and go there. As a result, there is less random searching in automobiles.

Another factor is what Matthew Yglesias calls "the end of retail." Only one enclosed mall has opened in the United States since 2006, there's a website devoted to dead malls, and some big-box retailers such as Best Buy and Barnes & Noble are having a tough time competing with internet sellers. Not only are kids today not cruisin', internet sales were 15% higher last December than they were the year before. That's a rapid and radical shift in the structure of our economy.

As a result, we are beginning to adapt, more quickly than I had feared, to the realities of peak oil. When American oil production peaked around 1970, Americans lost control of the price of the product. When world oil production peaks, the Saudis will probably lose control of the price of oil. The result will be higher prices, and consumption must not merely flatten out, it must go down as production falls. Alternative fuels and electric cars are the main solutions that have been proposed, and maybe there are enough people out there driving a Prius to make a dent in consumption, but right now, it looks like the internet is the solution having the greatest impact on the problem.